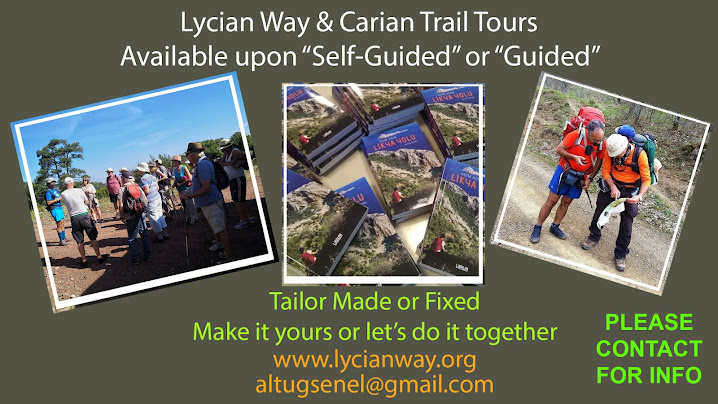 Request for Help and Guidance

14:54
•
"Top Menu" section includes the updated GPS datas of all Lycian Way. Lycian Way paths were updated during 2019 due to some mandatory changes and make it connected to Pisidia and St.Paul Trails.

All these trails will be a part of Via Francigena Trail in following years.

For updated routes let's keep in touch and we will be providing all updates here. You may follow our Wikiloc account for all updated and new culture routes in Turkey.

13:19
•
We will be announcing our 2020 programs in January after some company and closed (friends&families) groups' dates are comfirmed.

Trekking on culture routes with Altug Senel, professional tour guide will be unforgettable... 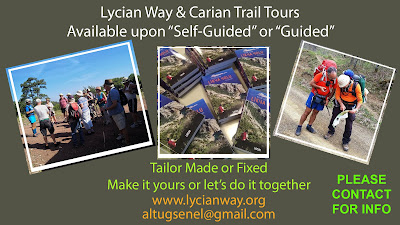 Born in 1976 in Izmit, Altuğ Şenel got his Mechanical Engineering BSc and MSc degrees at Istanbul Technical University and began his whitecollared career in Ford Otosan. He worked in Ford Motor Company UK as an ISE (International Service Employee) and returned to Turkey after his program was completed. After working in Ford Otosan as a purchasing and finance manager and he decided to finish his whitecollared career.

Altuğ Senel has been actively engaged in photography more than 25 years and studied at Anadolu University as a Photography and Camera Operations. During this time, he became a chairman  Kocaeli Photography Art Association (KASK) for two terms and currently working as a Photographic Arts Federation of Turkey (PAFT) representative in photo competitions. He regularly writes about his hiking and trekking activities for the past 10 years. www.likyayolu.org was his kick off since she started writing his personal web address as “diary”. His blogs encouraged hundreds of people to go out, to the nature. He translated his Turkish website into English (www.lycianway.org) as well. He founded a group with 25,000 members in Facebook, where shares are done interactively and he is still trying to encourage people and volunteers from the social world for 10 years to go into nature.

His book “Step by Step Lycian Way” (Adım Adım Likya Yolu in Turkish), published in Turkish during mid-2018, became one of the main sources for those going to the Lycian Way. The first edition of the book became an intense interest and within a year the first edition was sold out. Nowadays he is working on his second pressing which will contain route updates as well.

He also graduated from the Department of Tourism as a Tourist Guide at Istanbul Ayvansaray University. Now he is an official licensed Tourist Guide. After ending his whitecollared career, he is now settled in Marmaris with his family. Today, he is an active tourist guide in nature, he runs a homemade ice cream and coffee shop in Marmaris with his family. Altuğ Şenel, who has been invited to various associations and clubs as a speaker, still continues to study as a student at Anadolu University History Department. :)

Altuğ Şenel, who has a considerable Longplay (LP) archive of about 5000 pieces, writes about his experiences in music magazines, and nature and culture routes in Magma Magazine and Hürriyet Travel Magazine. 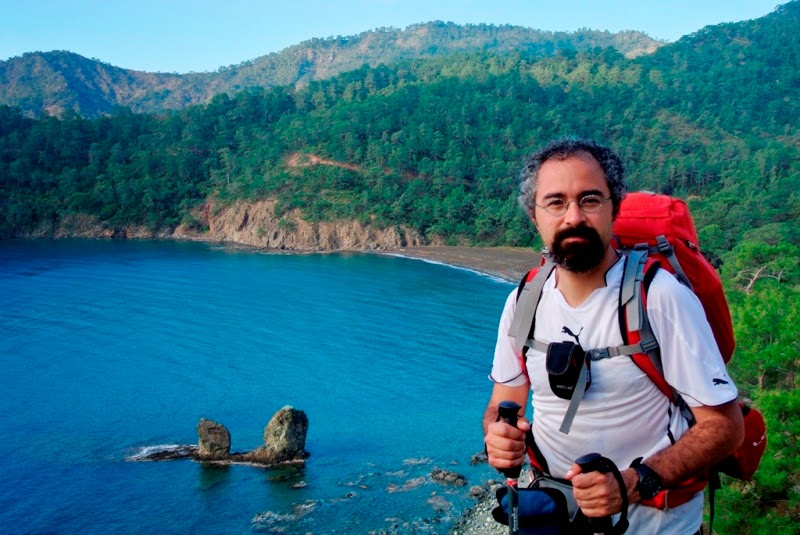 11:04
•
Besides our discoveries in 2018, we made numerous presentations, occasions, volunteering activities and guidance (personally and self-guided) to groups.

Altug's book “Step by step Lycian Way” was released in March 2018, written basically in Turkish. In a short period of time, half of the pressing was sold out. He is still working on the English edition of Lycia and Carian Trail.

Days spent on the ancient paths of Lycia, friendships, fellowships with locals on trails and trustworthy Wikiloc records makes hundreds of domestic/foreign people walk on many culture routes of Turkey, especially Lycian Way and Carian Trail.

We will keep on sharing and writing.

You can either meet us in various trail running events. Due to shortage of our timings we’ve started to run on the paths as well as hiking for the last two years.

Feel free to get information about our services (guiding, self guiding etc) if you want to explore the paths step by step, with minimum transfer to make you touch nature and history and experience our friendships on trails. You can make it "step by step" even without any transfers (altugsenel@gmail.com). It’s all up to you.

As of November 2018, bookings of 2019 spring program of 2019 has been begun. Two full weeks and three weekends have been booked already.

Let's get together for a different and special experience.

Walking is philosophy and a way of thinking...

Hope you got back home ok and getting ready for your next trek.

Just like to say how much I enjoyed the weeks walking and many thanks for leading us across the Carian Trail. I had not been to Turkey before, but will certainly be considering coming back in the near future. Also thanks for CD with photos of the walk - its a good memory of the week and fellow walkers.

Thank you for the wonderful photos.
Thank you for your professional work.
I tell you, as a mountaineering instructor with 30 years of experience.
You are very good at it. I will be glad to meet again.

13:09
•
Mehmet Koçdemir
Lycian Way Guide Book (first press will be in Turkish) will be available in two weeks time. The book is in print as of March 10th.

"Adım Adım" Lycian Way ("Step by step" in English) is a book that contain my notes and experiences. Will be available in bookstores and internet.

Those who want to get the book can email me because it's not on the internet yet (altugsenel@gmail.com). I can send it by post.

Smaller you make the book, easier to carry. This is the smallest book in size with A2 map inside.

I did not write this book considering it as a guide. I took care to prepare the contents who want to hike but cannot due to several reasons. I tried to contain its history, nature, pre-walking preparations, visuals and "step by step" routes by not over-weighting in bags and memories.

It contain QR codes, that make it able to access GPS data of each track and information about the accomodations. So I would like you to see this book as a "frequently asked questions", not just a guide.

Of course, the book contain an A2-size map I prepared

This is why it's going to be a "step-by-step" series. This book is a beginning. Different countries and roads will be published as "step by step". 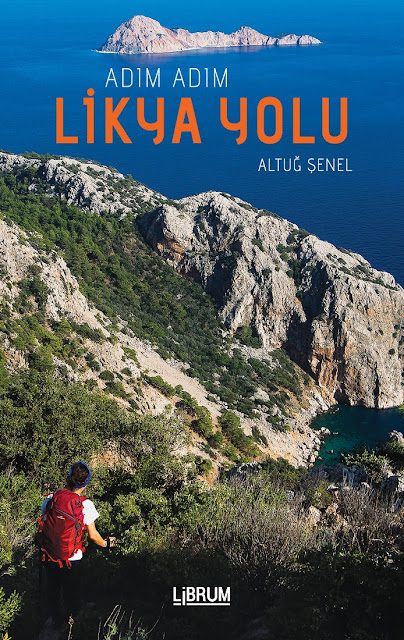 21:23
•
Trailer
Trailer of Lycian Way Documentary has been published.

During March or April 2018 you will be watching the whole documentary. 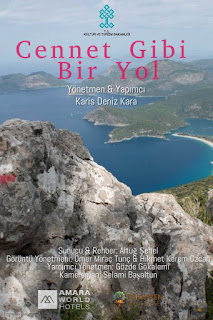 23:17
•
Olympos
We decided to give a “heads up” to the people regarding the increasing pollution on Lycian Way. Pollution is mainly due to camping wastes, such as cans, brewages, water bottles and wet wipes.


We volunteered for this and collected wastes and garbages on a popular Lycian Way path, Karaoz-Gelidonya Lighthouse-Adrasan-Olympos-Cirali.

This was a two day organisation that everybody came to the starting point (Karaoz) by their own. We fixed the date and decided a meeting point and we were all there. This was an organisation open to everybody.

In nature, we all pay attention to our clothings, tents etc. But we have to focus on the fact that we carry food and cleaning supplies from the city to the nature and leave the wastes of them an the garbage cans in the settlements which is a few kilometers away.

Thank you very much for all those who had contribution in this beautiful synergy. We can manage good things together.

Meanwhile, we planted an olive and carob trees at Gelidonya Lighthouse that were the commemoriatives for this organisation. Do not forget to water it if you go there. But get the water from the lighthouse’s cistern which is not drinkable.

NEWS ABOUT THE EVENT (TURKISH LINK)

DO NOT PREFER TO CARRY A HEAVY BACKPACK. LESS WEIGHT YOU CARRY, MORE YOU WALK. CLICK HERE!!!